St Patrick was from Wales!

The name of St Patrick is celebrated around the world – everyone knows the patron Saint of Ireland.  Facts about ancient saints are sometimes clouded in myth and legend, but we know for certain that Patrick is a real, historical figure. His writing still exists today, including his autobiography.

But Patrick didn’t start in Ireland. Brought up in the west of Britain, at a time when Britain was occupied by the Romans, his family were members of the Romano-British church and lived at a place called Bannavem Taburniae.  Then dramatically, at the age of sixteen, Patrick is kidnapped by Irish pirates and forcibly taken as a slave to Ireland.

After six years in slavery Patrick escapes, and on returning to Bannavem Taburniae he recounts the experience of a dream which tells him to return to Ireland with the Christian message. Well, scholars have wondered about the location of this place Bannavem Taburniae described by Patrick, and now a small village in South Wales is beginning to supply answers. Welcome to the historic village of Banwen…

… this place was busy in Britain during the Roman occupation. The strategic Roman Road, called Sarn Helen, runs right through the centre of the village. Today a handful of houses built for miners in the old mountain coal field stand either side of the Roman highway.

On the edge of the village is Roman fort, and there’s a long-forgotten ruin, just at the side of the Roman Road, called ‘Tafarn y Banwen’. It is here the village celebrates ‘Tafarn y Banwen’ as being the Roman settlement Bannavem Taburniae – the original home of St. Patrick. Local names tell of the place’s history. Land by the Roman fort still caries the old Welsh name Maesmarchog – field of the horse soldier, and the stream is called the Pyrddin – The Pure Man – in the valley of Dyffryn Cellwen – which means the White Cell. Land and language here fits with Patrick’s own story.

If you visit the village today you can walk along the Roman Road, take refreshments in the Sarn Helen café, run by a local family, and see the Celtic Cross standing by a small mountain stream that marks the spot where the village claims Patrick was bought up, next to the Roman road.

Local author and historian George Brinley Evans tells how he first learned of the story in the 1930s when the popular national John Bull magazine carried an article claiming that Patrick was from Banwen in South Wales. “I was amazed and delighted,” said George, “because Tafarn y Banwen was on land that my grandfather farmed. I had always known the place.”

The claim about Patrick appeared in other books, and the mining village of Banwen has come to celebrate the story by erecting a Celtic Cross and planting two olive trees on the site. Every year on St Patrick’s day, children from the local school join villagers walking through the streets to the St Patrick memorial where a service of remembrance and thanksgiving is held, followed by a community tea party.

Nearby are famous show caves of Dan yr Ogof, and the villagers of Banwen welcome visitors seeking glimpse of Wales’ living Roman history, and the story of the man who, after escaping from Ireland as a slave, returned, becoming a most remarkable and courageous person in the history of Christian witness. 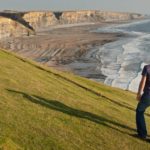